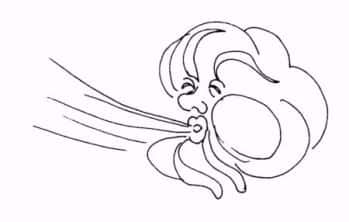 Boaters who have tried to argue with Mother Nature, have discovered that she’ll win every time. She has more power than your boat.

As a result of this fact, many boaters get frustrated and frightened when it comes to docking and undocking their boat, and even get a little embarrassed. Some even decide to get out of boating all together.

How do you outsmart Mother Nature when undocking?

The easiest answer is to master the techniques in Doug Dawson’s Docking Lessons and learn the techniques that work on each drive system (each is different) to dock using the wind instead of being a victim of it. Several boaters have asked about outsmarting Mother Nature when backing out of a slip into a wind, so we will address the following scenario. It applies to all boats both power and sail, all drive systems.

You have three choices:

The natural First choice is to back out and try to force your bow to come around 90 degrees into the wind.

With the wind howling out of the east, and you attempt to back out of the slip, you know from experience that the whole boat (especially the bow) is going to get blown to the west. You have to stop reversing, because there are boats on the other side of the fairway that you don’t want to hit.

Now from total dead stop with no momentum, it’s very hard to force your bow to come around 90 plus degrees into the wind without running out of turning room in most fairways. You’ve probably already unsuccessfully tried this maneuver and discovered that Mother Nature wins almost every time.

If you try to recover from this stopped position by turning hard over into the wind and throwing it in forward, you will end up either against the dock that you just came out of or hit one of your neighbors transoms, because the wind with not allow the bow to swing around the direction you want it to go from a dead stop.

The dead stop is the problem and therefore you don’t want to do this, because you end up arguing with Mother Nature and you know who will win.

Your Second choice is to back out of the slip turning your transom into the wind without stopping and back all the way to the upwind end of the fairway, then turn where there is lots of space to depart the marina exit.

Backing full length of any fairway is challenging with most drive systems. Practice in open water backing straight upwind to discover, how easy or hard it is to do in your boat with your drive system.

When you undock this way, the bow doesn’t like to follow the stern for more than a boat length or two because it usually gets pulled off course by the wind or the torque. The wind is rarely straight down the fairway. It is usually off to one side or the other making it more difficult to control the bow.

Your Third choice is to cruise downwind to near the end of the fairway, turn 180 degrees, then cruise in forward back up wind to the top of the fairway. Then, exit out of the harbor.

There are fewer challenges when you work with Mother Nature. Letting the wind blow your bow down wind as the bow exits the slip is easy. Now, just let Mother Nature blow, as you back your power end (the stern) slightly upwind only one boat length. Once laying parallel in the wind and parallel to the length of the fairway, like a wind sock or a flag; shift into forward. Idle downwind to near the end of the fairway. Favor the one side of the fairway to give you maximum turning room. While still moving with plenty of forward momentum, turn hard over 180 degrees around into the wind. (To port or to starboard, depending on your boat’s tighter turning radius)

Give it a short shot of throttle to force the bow around against the wind. Give her another short shot if necessary. Keep moving around until you’ve completed the 180 degree turn. Then, cruise all the way back up the fairway bow first against the wind. Go past your slip and exit the marina.

You just out smarted Mother Nature.
Also, in this process, you’ll confuse all your slip neighbors by initially heading the wrong direction.

Let Mother Nature believe that she had just won by letting her blow your bow downwind. Then, from this location, that is more advantageous to you, with forward momentum, you turn around and attack from a position of strength with lots of momentum; as opposed to no momentum from a dead stop in Choice #1. You just outsmarted Mother Nature.

The only way to successfully back out of a slip in this situation, is to outsmart Mother Nature, so the Third Choice is your best choice.

As in the old cereal commercial where two brothers who thought their younger brother Mikey would hate the cereal, quickly found out that he liked it., “Try it, you’ll like it”

Give me your thoughts and results.