Tom and Wilma, who had dreamed of boating for years, were finally able to buy their first boat. They took delivery and excitedly prepared to be boaters and enjoy life on the water.

Having observed boaters and learned from the internet forums, Tom wrote his own instructions and was confident he could handle and dock a boat. How difficult could it be? After all, he had watched boats coming and going from the local marina and he could drive his SUV.

Their first outing was perfect. Their dream had come true. But, that was about to change.

What Tom didn’t realize was that he hadn’t learned good docking procedures, but instead had learned the perfect way to humiliate his wife.

Here is how Tom humiliated his wife in three easy steps. 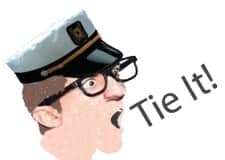 For decades, we have observed boaters like Tom who have perfected these three ways to humiliate their wives when docking. Some boaters are so successful at this, that a high percentage of humiliated wives mutiny, refusing to return to the boat. The result is Captains boating alone, eventually selling the boat or some even getting a mistress.

All this grief can be avoided by learning a better, safer way to dock your boat!

Tom followed his home-made notes to bring his boat into the dock and tie it!

After hanging his fenders properly, he ordered Wilma to take her position out on the foredeck. There was a slight wind, and the forward deck was still wet from earlier spray.  Wilma carefully made her way down the skinny side deck to the bow juggling the boat hook and the bow line.

Tom’s note #2-  Don’t approach the dock any faster than you are prepared to hit it.

Tom reduced speed as per his instruction. Without much difficulty, Tom brought the bow in to the dock for Wilma. But, the bow was much higher than the floating dock, requiring Wilma to lean out and over the bow rail to toss the line as the wind widened the gap between the boat and the dock. She tossed the line and missed.

As Tom managed to get the bow back close to the dock for her to try again, he realized the strong influence the wind had on his boat. He panicked. He yelled “Tie it!” in a loud excited voice. Wilma knew she had to throw the line and get it around the dock cleat this time or else, so she leaned out a little further and tossed the big loop in the bow line.

Just at that moment, Tom threw it in reverse so he wouldn’t hit the dock. This sudden jerking of the boat caused Wilma to lose her balance. As her foot slid on the slippery wet deck, over the rail she went splashing into the water.  Luckily, the wind had moved the boat away from the dock enough that she fell into the water without hitting the dock. As a result, their docking was a total fail and Wilma was humiliated.

It didn’t have to be that way.

If only Tom had purchased the right docking insructions for his boat, that were also safe for his wife, he could have avoided all this embarrassment and humiliation. Their perfect day on the water could have concluded with a perfect docking.

Our advice to all boaters is to get the correct instruction for handling and docking their boat and drive system. Then, they won’t repeat Tom’s experience.

see also: The Bow Can be Dangerous