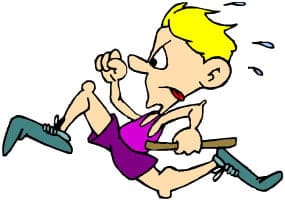 “Nope, no mail today” Matt announced as he ran back to the dinnette table after racing down the dock and back. Matt, my chum, often came on our family boating trips to Georgian Bay when I was a kid.

Back in the 50’s, Wahwahtaysee Island Dock was a mail stop for the cruise and cargo ship the “Penetang 88″* that delivered mail to several islands for nearby cottagers—none were accessible by car, so mail and supplies were delivered by boat. Wawataysee is just south of Twelve Mile Bay on Georgian Bay.

we were amazed at all the cottagers arriving in their boats to greet the mail boat and pick up their mail and supplies from the shed on the dock. The mail boxes inside were cubbies labeled with the names of each cottage. The mailman knew the names of all the people who belonged to each cottage and put the mail in the appropriate cottage cubby. They didn’t have postal codes or zip codes. Even the groceries and other supplies arrived on the mail boat with just the name of the cottage. We marveled at how he knew where to deliver the mail and supplies. There was never a mix-up. Everybody took their own mail and were all happy.

As a 6-year old girl, my sister Jacquie remembers Mom warning her to “watch out for the bees” in the shed on the dock. The shed door was always open allowing us to see the wall of open cubbies (that Jacquie believed was a huge honeycomb where the bees lived) for the cottagers’ mail. Between mail deliveries, the dock and mail shed were unused by humans so the bees moved into the rafters.

Jacquie was always watching out for the bees after Mother’s warning whenever she was near the dock or the shed. One day, Jacquie was near the dock and heard a loud buzzing sound that kept getting louder and louder. She was scared to death that she was going to be attacked by a swarm of giant bees.

What a relief when she realized that the loud buzzing noise was really the outboard motors powering the boats arriving at the dock to pick up their mail and groceries from the shed. To this day, she still remembers how scared she was.

Back then, in the 50’s, the husbands worked in the city while the mothers and kids summered at the cottage. Dad arrived for every weekend and went back to work for Monday morning. The women had no trouble driving and handling the tin and fiberglass outboards. There were some beautiful old inboard woodies, including double end Dispros**. It was almost like Muskoka. The only sterndrives we saw back then, were the old original Eaton “Clunk Clunks”. They were nicknamed that because they were so rough changing gears and they had no power trim or power tilt. Sometimes, when you got it in reverse gear, the lock didn’t catch and you’d have the outdrive propeller spinning on the surface resulting in no reverse.

These cottagers’ boats became members of their families (like pets) and cottagers commuted from the marina to the cottage, the mail stop and everywhere else in “The Boat”. They never traded the boat like a lot of cruising boaters did and still do. They would just repair and repower and keep her in the family—keep the old boat forever. I think some cottagers still do that today. 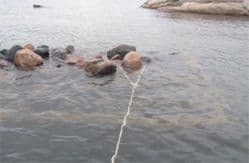 When we stayed anchored off Wahwahtaysee Island close to the cribs of the old mail dock in July 2010 aboard our cruiser “Windy”, I observed dozens of cottage boats from the 60’s, 70’s and 80’s darting back and forth from cottage to marina outpost supporting my theory that the tradition holds true today, even though the mail service has changed. (we tied to the old crib–see picture)

It was like a conflict of the decades sitting aboard Windy remembering history and seeing tradition repeat itself as kids in open boats went scooting by to the marina with dad and grandfather aboard. Meantime, we and most people in the cottages are hooked up to the internet sending emails wirelessly. Some traditions have gone by the wayside, but many remain and will continue to.

As a kid, one particular holiday docking at Wahwahtaysee sticks vividly in my mind. Dad had picked a new 1963 33′ Shepherd Express Cruiser from our marina’s inventory for our holiday. A customer of Dad’s arrived a couple of days later for a stay in his 31′ Richardson Express Hardtop 1959. Mr. Porter and his drinking buddy, had run out of booze and by VHF radio, he successfully commandeered one of the local native guides to take us all to Parry Sound for more booze. It was a night run and the guide ran on plane all the way from Wawataysee to Parry Sound after dark. He didn’t use a spotlight, a compass or a chart. He knew every rock and island like the back of his hand. To each his own I guess. This route was his backyard and he had done the trip since he was born.

As kids, we got excited every time a buoy flew by the boat, not understanding how he could find them all. He’d just say “Watch for it. There’s a red buoy coming up”. Sure enough, a red buoy would fly past the boat. Then he’d turn off the running lights because he said they interfered with his night vision. We were so impressed—but mother wasn’t.

After a successful trip to Parry Sound and back, Mr. Porter had his booze and we all tucked in for the night. 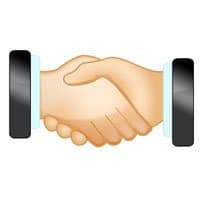 The next morning, Dad spent a lot of time talking to Mr. Porter. We didn’t know what the conversation was about, but we soon found out. Mr. Porter wanted a bigger boat. So, being in the business of selling boats, Dad sold him ours—that’s right, the one we were holidaying on. Mother was livid and complained the whole time we were transferring all our “stuff” to Mr. Porter’s boat and they were loading our boat with all their “stuff”. So much for our holiday!

We were as upset as Mother was. Dad was quiet and said “The guy wanted to make a deal so we made a deal”. 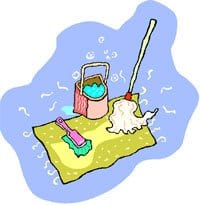 Later that day, Mr. Porter took off in our 33′ Shepherd on a handshake and a promise to send Dad a cheque when he got back. Mother worried “what if he piles it up on a rock? What if he drowns and doesn’t get back? What if? What if?” Dad cooly said “Don’t worry, he’ll be back and he’ll pay me”—and he did. Back then, handshakes were as good as or better than contracts.

For the rest of our holiday, Mother fussed and fumed while cleaning “Mr. Porter’s boat” and we, the kids, had a great time greeting the mail boat and making fun of everything and looking after Jacquie.

Jacquie lived in a life jacket any time she was out of the cabin of the cruiser. To keep her occupied on the dock, my brother Jim and I had rigged her up a fishing pole from a dead pine branch, some line and a baited hook. After hours of dragging the line along the edge of the dock, a fish finally grabbed her baited hook.

She jumped in excitement, setting the hook in the fish’s mouth. As it dove to escape, it yanked Jacquie head over heels into the water. Some fifty years later, Jacquie still recalls counting the logs in the crib under the dock as the fish pulled her down. Determined to catch this fish, she said she held on tight, eventually letting go. The buoyancy of her jacket popped her back to the surface. We had her back on the dock before she could yell “Fish”!

*I have heard that the Penetang 88 became the OLYMPIA III, for use at the World’s Fair in Montreal in 1967 then ended up with the Sea Cadets in Hamilton, Ont. I don’t think it was ever restored.

**Dispros were first produced in 1915, and most were made in the 1920’s. They had light-weight gasoline engines, and disappearing propellers–thus, the name dispro. The operator could lift the propeller into an interior housing tunnel allowing the boat to go almost anywhere a canoe could go but allowing it to move with as little as an inch of propeller sticking out the bottom. If the propeller struck a log or shoal, it would retract automatically.