Of all the power boat docking challenges we reviewed over the past two weeks for our “Most Difficult Docking Challenge”, John Heasman had the most difficult by far. But, he didn’t stump the expert! 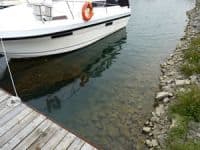 “I am a new boater this spring and have a 270 Prowler Cruiser with a single I/O. My slip is the last one at the end of the fairway with the prevailing wind coming straight at me as I head down the fairway to my slip.”

“The other side of my slip is a rip rap stone wall sloping into my slip space.  To dock, I come down the fairway and turn to starboard to enter my slip against the wind, but I still end up “on the rocks” on the other side of my slip. I am already on my second propeller. We boat a lot when there are no dock helpers around so I have to be able to do it with just me and my First Mate. How can I dock in my slip so that I land on my dock and not the rocks?”

The Boat and the Boat Docking Challenge

John’s 27’ Prowler has: a high camper with high superstructure; almost non-existent side deck; high cockpit sides that are busy with camper bows and down riggers; and no walk-thru windshield. The transom gate is on the starboard side, and John needs to have the gate at the floating dock for an elderly family member to board.

His marina assigned the most difficult and unsuitable slip for John’s boat making close-quarters maneuvering almost impossible. The slip (which is too short for his boat) faces north and his approach is from east to west into the prevailing winds. Even though the wind should blow him onto his dock, his slip is in a vacuum with a reverse wind that pulls him off his dock onto the rocks. The vacuum is caused by the high hedge that borders the edge of the public walkway adjacent to his slip. When John gets over too far, his chine and propeller hit the big rocks on the sloped wall.

To top it all off, there is a huge boulder off his port transom corner that he has hit a number of times while trying to maneuver into his slip.

The dock cleat is mounted roughly 2 ½’ in from the end of the dock. With the size of his boat, the bow pulpit was getting caught on the hydro/water pedestal at the dock walkway.

This slip is only suitable for a smaller sailboat that has a keel allowing it to carve its way in without the sideways momentum. It would also be suitable for a smaller power boat so there is more room for maneuvering just outside and in the slip—preferably one with bow access like a bow rider or centre console.

John can’t back in, because his elderly passenger would have to maneuver full width of the swim platform and bend underneath the downrigger that is mounted on the port aft corner. He must come in bow first to position the gate on the starboard side, on his dock.

His First Mate, Yvonne, can’t use a bow line because there are no side decks and no windshield walkthrough. Even if she did have deck access, she’d never reach the dock cleat and that wouldn’t stop the boat anyway—YOU CAN’T PUSH ON A ROPE.

Well, even though John has the most difficult slip, he is now using our techniques and docking his boat.

On my recommendation, John has installed an extra cleat at the very outside end of his dock which gives him an extra 2 ½’ of dock length to accommodate his boat a little better.

His only approach is to come down the fairway and turn to starboard into his slip. His fairway momentum*** pushes him toward the rocks as does the reverse vacuum (away from his dock).

Ideally, John should have enough room past his slip to go “Beyond and Back”** to approach his dock at a 25 degree angle. He can’t because he is right against the rock wall. 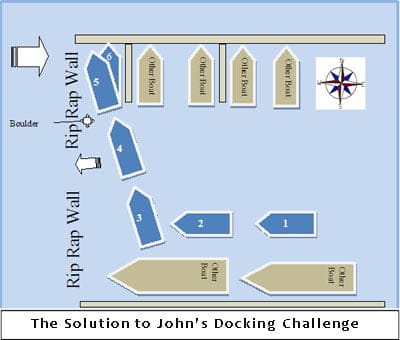 Instead, I’ve modified his approach slightly to approach up the far side of the fairway which allows him to turn and approach the corner of his dock with only forward momentum and no sideways (off the dock) momentum. It is his sideways off-the-dock momentum that gets him in trouble every time with the rocks. He MUST slide the whole boat straight into the slip past the corner on about a 15 degree angle off the dock.

Initially, she tried throwing the FLIPP Line™ through the clutter of the bows but it usually bounced off the dock cleat on the first toss and by the time she was ready for the second toss, they were on the rocks. So, we re-located her to the swim platform for direct unhampered reaching—not tossing of the FLIPP Line™, so she could lasso the cleat every time.

To shorten the length of the Stern FLIPP Line™*, John has it attached to his transom eye instead of his stern cleat, because it is closer to the same height of the dock cleat instead of being way above it. As a result, the Stern FLIPP Line™* stops the boat much closer to the end of the dock so his bow pulpit doesn’t tangle with the utility pedestal on the dock walkway. Yvonne can use the Stay-Aboard procedure so she can secure the boat from the safety of the swim platform and John doesn’t have to worry about her falling or injuring herself. If he has to abort and try again, she is safely on board.

Even though the bow is way off the dock and scary close to the rocks, the forward hull shape is the same as the angle of the rocks and there is nothing to be damaged if the hull touches the rocks—there would certainly be damage if the transom tangled with the rocks.

As soon as the Stern FLIPP Line™* is secure, John turns the wheel hard to the dock (starboard) and touches the shift into forward.

To make this procedure work, John must always approach the end of his dock with only forward momentum, easing his hull into the slip past the corner with about 6” of clearance—most importantly, with no sideways (off the dock) fairway momentum***. Remember, the momentum pushes him towards the rocks. With fairway momentum*** he could get the bow tight to the dock corner but, by the time the stern gets in, it is too far off the dock corner for his First Mate to reach the cleat and he is “on the rocks”.

If he were to steer the stern over to the cleat, the bow would end up on the rocks for sure. So, his approach must be straight at the corner.

On days with and east (off the dock) wind, it is almost impossible for him to dock in this slip. His only solution is to tie up at a different location in the marina until the wind changes or line up dock helpers. If he can get close enough against the wind, she could throw the stern line to one helper and the other may be able to pick up the bow line. If John sees that he is too far away from the dock on his approach, his only alternative is to abort—back out, go back down the fairway, do a 180, then re-approach—as many times as it takes.

My advice to John is to request a more suitable slip, to remove the stress from his docking. This slip is definitely NOT suitable for his cruiser!

Congratulations John and Yvonne! You have been chosen as the boaters having the Most Difficult Boat Docking Challenge and will receive free Boat Docking e-Lessons, both Introductory and Advanced for a Single Sterndrive, (retail price $103) Value=Priceless.

They will receive, detailed, step-by-step instructions with pictures and diagrams to dock both bow first and stern first in all wind conditions and various slip situations. Also included are many other neat docking maneuvers to help them on their boating travels—approximately 350 pages of instruction specific to a Single Sterndrive.

Thanks to all those who submitted entries. All other Boat Docking Challenge Entries have received personalized instructions on how to overcome their docking challenges, but none were as difficult as John & Yvonne’s.