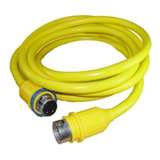 Boats, both power and sail, that are wired for 110V, need Shore Cords to plug into marine power at the dock. Some use one while others need two cords.

But, there some things you should know before handling your Shore Cord.

How do you safely run the shore cord from the power post/pedestal on the dock, to the power inlet fitting on your boat to supply power without causing harm to you, your guests, your boat or others?

Shore cords are specifically designed for marine use where water and hydro are in such close proximity.  Unapproved cords should not be used—in fact in most marinas, they are not allowed.  Domestic extension cords, for example, are not approved for marine use and could actually be dangerous.

Inspect Shore Cords for any damage to the cable and replace if necessary to avoid any stray electrical current in the water. Boaters or pets falling in or swimming in a harbor where there is stray current will most likely die of electric shock drowning. It is invisible, silent and deadly. Research “Electric Shock Drowning” for more information.

SHORE CORDS ON THE DOCK SURFACE are dangerous.

The power pedestals/posts in some marinas are positioned in the centre of the slip so that two boats can access power without the need for cords to be strung across the fingers.

If, for some reason, you have to run your cord across a finger, be sure that it will not be damaged and that no one will trip on it or step on it. You can string it under the finger tying it up so that it won’t lay in the water, or jam it between the boards on the finger if there is space.

SHORE CORDS IN THE HINGE on a Floating Dock are Dangerous.

The cord should be below the surface of the dock, without being in the water, so that no one can step on it; but, do not lay the shore cord in the hinge between the finger and the dock. Floating docks move up and down and the fingers move from side to side in a wind separate to the main, pinching the Shore Cord and eventually breaking the cable coating then shorting out on the framing. In many cases, the hinges are steel and the dock framing is steel. When the Shore Cord wears, the wire is exposed to the dock, and the whole dock becomes live, leaking electrical current into the water. This is extremely dangerous and a recipe for disaster.  Stray electrical current is invisible, silent and deadly.

Like everything else marine, you have to know how to use, store and care for your cords.

Extra cord, if not coiled properly, can be hazardous to boaters walking on the docks. So, be sure to loop it loosely around the power post.

When travelling, some boaters prefer to coil up their shore cord each time and place it in the locker. Some like to leave it laying down the side of the boat for short trips and others prefer to tie it to their finger dock for the season. 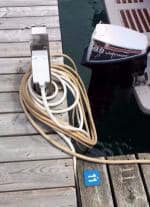 To reduce dock clutter for a long stay, I like to tie my shore cord under the dock out of sight, above the water or between the boards on the finger dock (not in the hinge). The major safety benefit is that it’s not on the dock surface lurking for someone to step on it and having it roll out from under their foot or shoe.

Larger yachts that run with two shore cords use various methods to reduce the clutter. Some boaters will join the two cables with intervals of either electrical tape or duct tape or nylon zip ties/wire wraps. I have even seen a long black flexible nylon tube holding the 2 together that runs the full 50’.

For the majority of the summer, most boaters just take short jaunts of a few hours here and a few hours there away from the home marina; and for this period of time, there is no need to take your shore cord. Most finger docks are high enough above the water and with enough framework that you can suspend your shore cord under the finger dock from a series of short pieces of light line. You can use light poly or light nylon, metal “S” hooks, bent coat hangers, shrink wrap cord, bungie cords, long wire ties—whatever works for you. Be sure the cord does not hang in the water. The only time it really needs to be removed is when you’re going on a long trip or for the winter. It’s neater and safer to secure it off the dock surface.

Loop the extra cord around the outlet post. If you find your cord is being disconnected by kids or other boaters, use a bungie cord or two to hold it into the outlet and discourage them. It gives the message that it is to stay plugged in.

At the boat end, the weight of the cable should be supported and not hanging totally on the fitting. You can loop the cord through one of the rails, so the cable’s weight is supported by the rail or use a light piece of line to support the weight.

Knowing which end of the Shore Cord to plug in first is most important. When arriving at the dock, plug in the boat end first, then the dock end. If you do it the other way around, you, could be electrocuted if you accidentally drop the live Shore Cord in the water or grab the end of the cord with wet hands.

You wouldn’t connect the dock end of your water hose first and turn it on before connecting to the boat.

Similarly, you shouldn’t connect the dock end of the power cord first, then handle and connect a live wire to your boat.

Always plug in the boat end first, when arriving at the dock – BOAT IN FIRST WHEN ARRIVING.

Knowing which end to unplug first is also most important. Think of your shore cord as a water hose. The only way to turn off the water flow is at the dock end first. You wouldn’t disconnect the water hose from the boat first, because the water would continue to flow.

Similarly, you shouldn’t disconnect the boat end of the Shore Cord first, because it is still alive and could potentially kill someone if it landed in a puddle or fell in the harbor.

Always unplug the boat end last when leaving the dock. – BOAT OUT LAST WHEN LEAVING

and handle them with care

to avoid all the dangers

caused by misuse and wear.

2 thoughts on “Shore Cords are Dangerous?”