This year, boating will be different. With all the “lockdown” and “stay home” requirements, we weren’t sure when we would be allowed to get into our marina to see our boat, let alone start preparing for spring launch. There are about 200 boats in our location.

There were even discussions that maybe we wouldn’t be able to go boating this summer if the virus spreads out of control.

Boaters start preparing for spring launch early in the year, as boat shows trigger their desire to get back out on the water. The start of fishing season excites fishermen, and the warmth and wind invites sailors to be ready for launch. At least, that’s how it’s been in the past.

But, in the middle of May, our Premier announced that marinas were added to the places that could start opening safely on Saturday, May 16, 2020. This was great news! Then, we got the notice from our Yacht Club that the crane was coming on May 23rd and we would have to be ready for launch—just 6 days to prepare. The crane would only be there for one day.

Spring Launch given the go ahead

All the members rushed to their boats during the week to take off the tarps or shrink wrap, summerize their engines, have all the lines in place for the crane, and also fender and dock lines ready. Surveyors were scrambling to get surveys done before launch for insurance policies. Marinas across Ontario were buzzing with activity that week.

Spring launch 2020 came with a whole set of new rules that are different depending on where your marina/yacht club is located. Local, provincial and state requirements for social distancing and masking dictate how facilities could launch boats while protecting staff, trades and boaters from COVID-19.

For us, as complicated as it sounded at first, the COVID-19 rules were incorporated into the launch plan for our Yacht Club and communicated in detail to all the boaters. Only one person was allowed per boat to attend Launch Day. We were each given an arrival time and location to wait, until the crane was ready for us.

I arrived at my designated time wearing my mandatory mask and was ushered in by another masked boater when it was my turn.

The crane lifted and launched our boat Windy that a helper and I temporarily tied to the dock.

I started the motors and after letting them warm up, I drove off to my slip and tied there. In the picture, behind Windy, you can see the crane launching more boats on the other side of the harbor.

With all of us following the plan, we all launched, without incident and finished an hour early. Well done to all who participated.

The minor differences were obviously the masks and social distancing and the “one-at-a-time” approach, but other than that, the procedure was like other years and went like clockwork.

The major difference, was the “only one person on the boat” rule which meant that once you were launched, you were on your own to dock in your own slip. We were given another option and that was to have a volunteer from the club come aboard to help with docking.

In either case, different docking skills would be required. If you weren’t used to single handed docking, it could be tricky. If you had a “stranger” as a helper rather than your usual First Mate, you have only a few minutes to train them on your procedures.

Brushing up on docking skills before launch would be a good idea for boaters, who haven’t launched yet, so that you aren’t caught off guard.

For boaters already in the water and getting ready for a summer of fun, brushing up on docking skills is also a great idea, to take the stress out of docking, when you come back to your slip.

We hope your Spring Launch 2020 goes as well as ours. 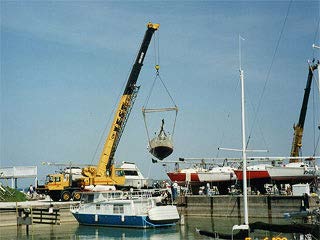