Last week I wrote about Colonel Potter from MASH and his memorable quote, “I know what I’m talking about”. This is an expression I still want to use many, many times, as I advise boaters who screw up their dockings.

Many times, the chaos created at the dock after coming back from an exciting day on the water, is caused by lack of knowledge and/or experience. There is an easy solution, and that is learning how to overcome the challenge.

Here are a couple more examples of Captains creating chaos aboard their boats caused by lack of knowledge. You may have experienced this yourself, or seen it happen to someone else. In either case, you can learn, or you can help someone else.

Props and Lines don’t go together

This doesn’t happen often, but more often that it should. When you see someone come into their slip and the motor stalls, several times, it’s probably because one of the lines is wound around the propeller.

In one instance, this happened to a pontoon boat. Two guys disastrously tried to dock their pontoon boat. Each time the Captain put it in forward gear, the motor stalled. He restarted the motor with no problem, pulled into reverse for a few seconds, the boat backed up. Then, he shifted back to forward and it stalled again.

Finally, they man handled it into another empty slip. He restarted the motor with no problem. Each time he tried reverse, it was ok. But, each time he shifted into forward, it stalled.

After much head scratching, he tilted the motor up. What did he discover? The port stern line was super tight from the stern cleat to the prop—actually around and around the prop. Please excuse the photo, but these guys on the pontoon were in no mood for me to take a picture of their fouled prop.

As Captain, you need to check your crew’s work, especially when you know they are not boaters. Lines and fenders should be aboard, when you depart the dock or ramp; so that they don’t tangle and stop your prop when docking.

“Wouldn’t it be loverly” (My Fair Lady), if there was a crew of trained dock helpers waiting on your dock every time you came back to your slip? How easy would docking be then?

OR, what if your boat could magically create arms and reach out and dock itself, every time you came in to dock? Wouldn’t that simplify docking!

Well, as wonderful as that would be, it isn’t reality.

Most times there is no one around to give you a hand and, if there were helpers, you have no idea whether they will be a help or a hindrance.

In the real world, you need to know how to dock your boat. If you don’t, chaos can be the result.

One day, when approaching the dock, the Captain of a big sedan cruiser and all his guests/crew were still enjoying the flybridge. After T-boning the end of the finger dock, he finally got the boat into his slip. The slight breeze off the dock, of course, blew the boat off the dock. He and all his guests/crew were still seated on the bridge. No one had climbed down to the cockpit to pick up a dock line.

Maybe they all expected automatic docking arms to magically appear, reach out to pull the boat to the dock, and hold it there indefinitely.

Since your boat won’t magically reach out and dock itself, you must know how to dock it. You also need to instruct your guests/crew what to do to help you in the docking process and how to do it.

If your crew isn’t trained, be sure to give very specific instructions like:

“Tie the stern line to that dock cleat. Don’t just hold it. Wrap around and around the cleat and pull on it until I tell you to stop “pulling”. Then, you need to re-tie each dock line, so that you are certain you are secure.

You can’t expect your crew to read your mind, or assume they automatically know what to do and how to do it.

You’ve perhaps seen other boaters dragging lines or leaving lines loose on the deck to later end up in the water. This is a catastrophe waiting to happen. Props don’t work when fouled with lines!

A few extra minutes checking all lines when leaving the dock can save you a lot of grief.

You’ve probably also noticed boats coming into the dock while crew/guests are still seated and relaxing, expecting the boat to dock itself, as if it were a car.

Not only does the Captain need to know what to do in the last 100 feet to the dock, so does the crew and/or guests.
Help simplify the docking procedure by educating crew and guests on what to do and how to do it.

Docking is fun when you know how.
Puts smiles on the whole family.

Pass on to other Captains –
to help them eliminate the docking chaos
to simplify their docking. 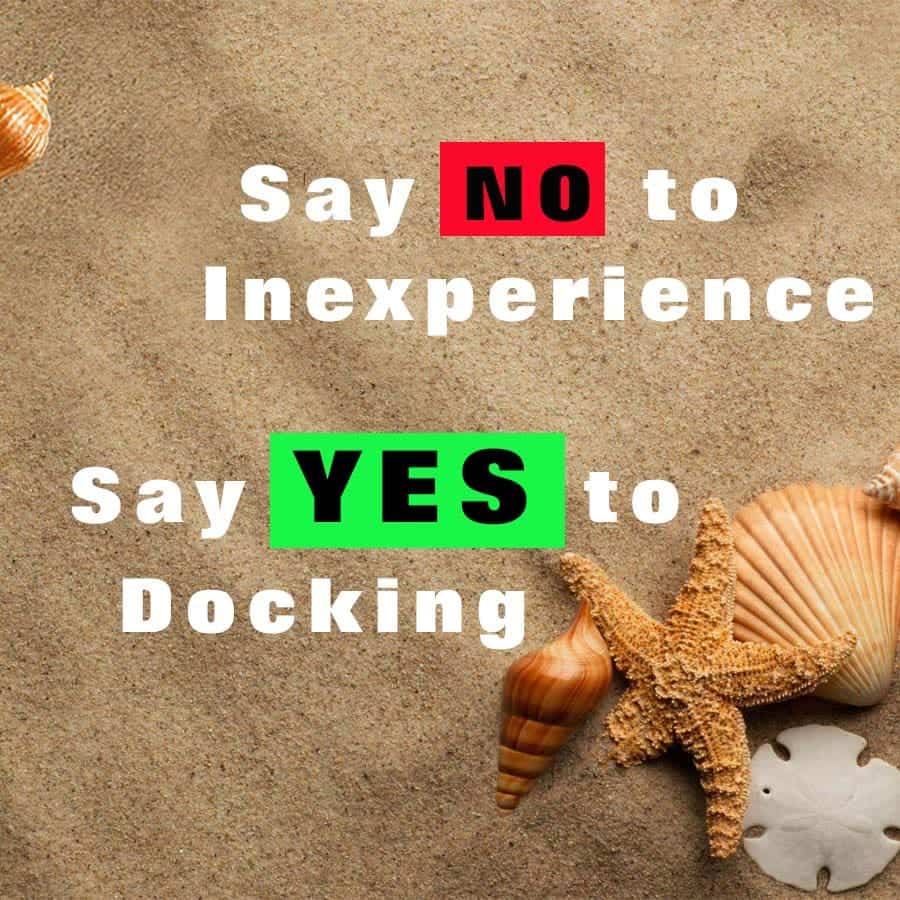